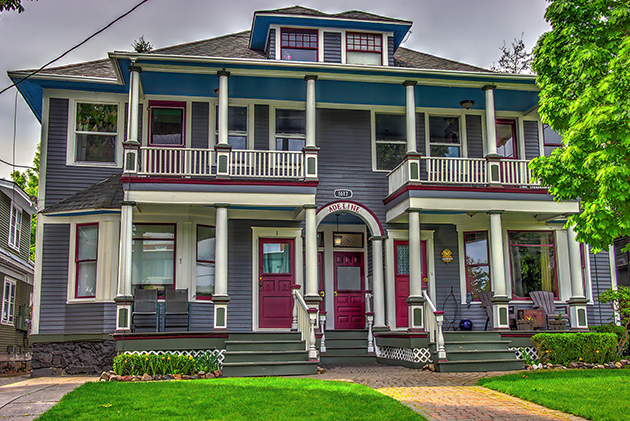 This apartment building was built in 1903 as a four-plex for Joseph and Bertha Kellner and their son Sidney, a salesman for M. Seller and Company (importers of wholesale and retail crockery, glassware, cutlery, willowware, stoves, and ranges). Joseph Kellner was a pioneer businessman and merchant who arrived in Spokane before the Great Fire of 1889. He operated a dry goods store downtown, developed real estate interests in Browne’s Addition, and was involved in the establishment of Spokane’s first Jewish temple. Other prominent Spokane figures, E. L. Richey, and later, William M. Day, were successive owners of the building. Kellner lived in the building for only two years before returning to his earlier home down the street. He later built and lived in the Marlboro Apartments. In 1943, the Kellner House was altered to accommodate apartments. A $13,600 war time housing lease was awarded by the United States Federal Government for the construction work, which was completed by Central Construction Company of Spokane. The building continues to serve as an apartment building today. In addition to its association with Kellner and other prominent figures from the city’s early history, it is also architecturally significant as an example of the Colonial Revival style, and historically significant as an early indicator of the trend toward multiple family living units that characterized the development of Browne’s Addition after 1905.

The Kellner House is a contributing property in the Browne’s Addition Historic District, listed on the National Register of Historic Places in 1976.