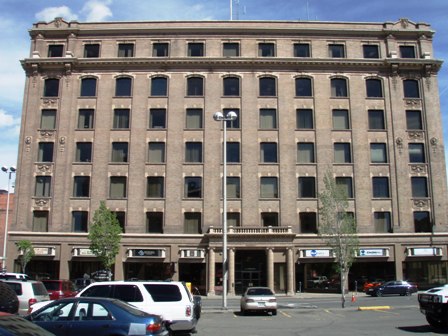 Levi and May Arkwright Hutton built this building from wealth made in the Coeur d’Alene mining district. May Arkwright came to the Coeur d’Alene district in 1883 and opened a boarding house where she met her future husband, Levi Hutton, a railroad engineer. The Huttons were married in 1887 and continued to live and work in the mining area, where they became involved in the labor struggles. They invested in the Hercules Mine in 1887 and in 1901 the mine struck ore, making the Huttons one of the wealthiest families in the Inland Empire. In 1907 they built the Hutton Building and upon its completion, moved into its penthouse where they spent some of their most active years. The Huttons became the leading figures in the movement for political and labor reform.