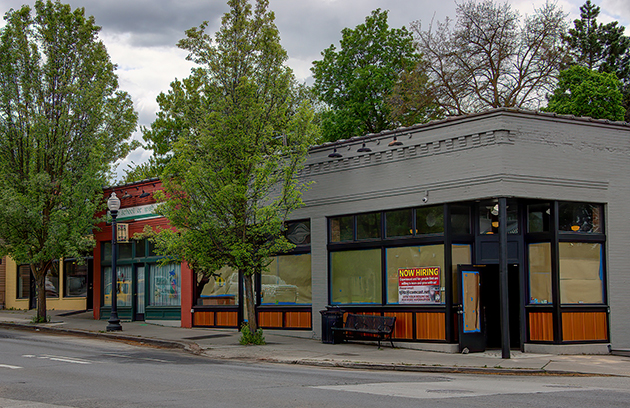 Built in 1910 for Spokane physician, Thomas Hoxsey, and his wife, Leita Hoxsey, who owned the property for more than 54 years, the structure was originally two adjoining single-story brick masonry commercial buildings. During its period of significance, the Hoxsey Block contributed to the health, welfare, and social needs of the South Perry Street/Grant Park community as an important commercial hub, central gathering place, and neighborhood retail and educational anchor. The south bay of the 1910 building, and later the south bay of the adjoining 1939 building, served as the neighborhood’s first and only community-based public branch library for a 65 years. The north bay of the 1910 building was the site of the Altamont Pharmacy, the neighborhood’s first and only pharmacy; and the center bay was home to a kaleidoscope of grocery & meat markets, variety stores, and retail shops. The 1939 building, which is nearly identical in design to the 1910 building, was occupied by Pat Noel’s multiple grocery businesses and Howard Aust’s market meats for 21 consecutive years, and later by shops and stores.