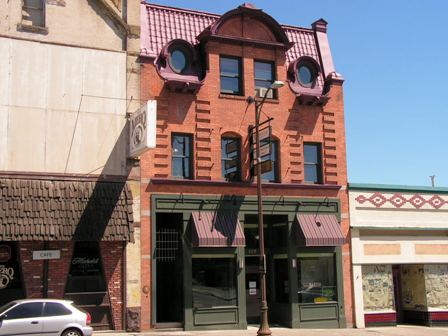 The Holmes Block, Second Empire in character, is a distinctive landmark among the early commercial buildings still standing in this area off Monroe Street.  Architecturally striking, the Holmes Block's facade features unique "porthole" windows and gargoyle waterspouts.  Architect Isaac J. Galbraith designed this building for saloon keeper James C. Holmes, who used the main floor as a store until 1907, when he converted it to a saloon.  It continued to serve in this capacity until Washington State passed a prohibition law in 1915.  After that, the second and third stories were used as apartments.