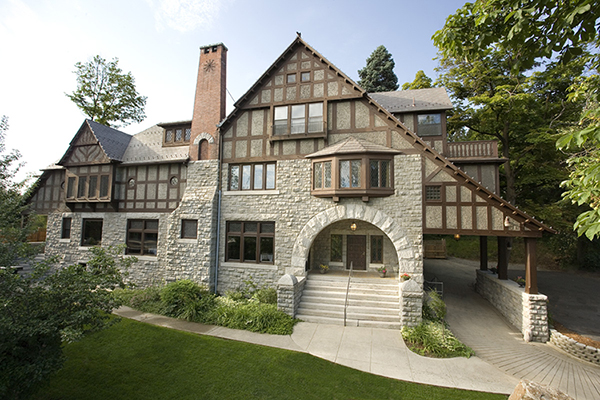 Built in 1888, the Glover Mansion is one of the first houses of importance in the area commonly known as the South Hill. The home is of English Tudor design with Shingle Style influence, a common characteristic of upper-class east coast homes of the time. Renowned Spokane architect Kirtland Cutter designed this majestic home for James Nettle Glover, celebrated as the "founding father" of Spokane, an entrepreneurial pioneer, visionary and leader of the early commercial and social development of Spokane. This home is architecturally significant for its association with Cutter, as it was most likely his first major architectural effort. After the construction of Glover’s home, Cutter-designed mansions quickly became immensely popular among Spokane’s well-to-do. In the 1940s the Glover Mansion became the home for the Unitarian Universalist Church of Spokane.  The church remained in the home until the 1990s and the mansion is currently used as an event center.