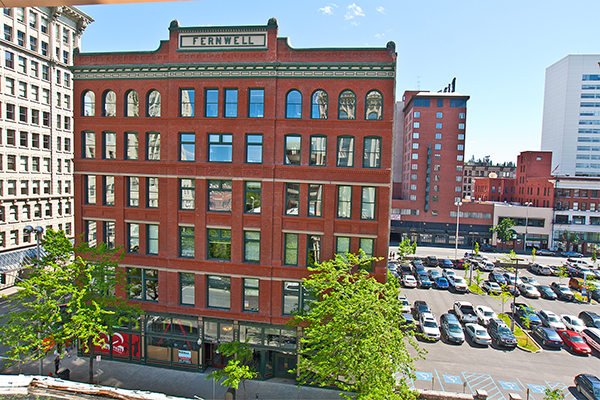 Rollin Charles Hyde, brother of Eugene Hyde who built the Hyde Block, built this structure in the aftermath of the Spokane fire of 1889. Originally known as the Chamber of Commerce Building, the structure became known as the Fernwell in 1893 and has continued under that name. The building housed a men’s clothing store on the ground floor for over ninety years. Preusse saw many of his first buildings destroyed by the 1889 fire, but those that remain today are almost exclusively brick and feature vernacular Romanesque theme. Born in Germany in 1847, Preusse received architectural training in Europe and was thoroughly skilled in design and drafting upon his arrival in Spokane Falls in 1882. Among his creations are several buildings in the central business district, the Gonzaga Administration Building, several Catholic churches, and private residences in the Logan neighborhood.