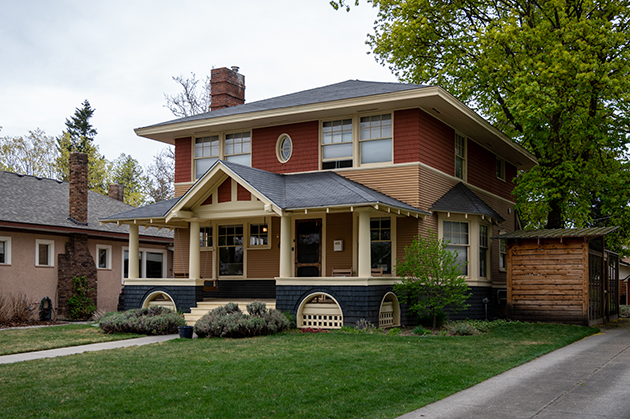 The Julius M. Dutton House demonstrates American Foursquare form with Colonial Revival and Craftsman influences. The form is named for the fact that both ground and second stories feature a room in each corner, creating a square, box-shaped footprint. The Dutton house is an unusual interpretation of the style, which compares favorably with other homes in the Sherwood Addition, a popular streetcar suburb in Spokane’s West Central.  The most prominent and unique features of the Dutton House are the half-round openings at the porch where other houses might display simple drain openings for an enclosed half porch, and the graceful oval window in the center of the upper facade. The Dutton house typifies one of the popular styles in the growing suburbs, often promoted in pattern books, although it was not as common in West Central. As such, it is a remaining embodiment of a phenomenon that was occurring throughout the city and across the nation at the turn of the century.