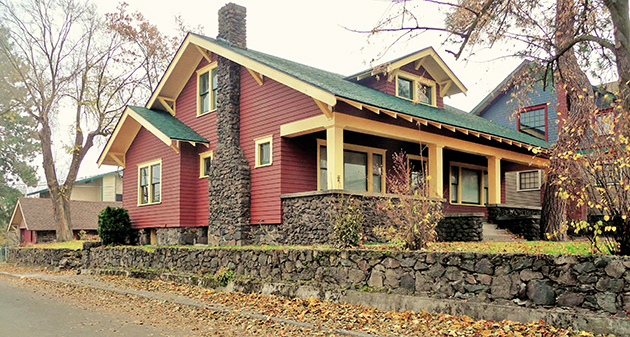 Built in 1913 and 1922 respectively, the Dodd House & Garage are excellent examples of the Craftsman style. The property was built for John Bruce Dodd, a Prudential Insurance Company agent and Spokane businessman, and his wife, Sonora Smart Dodd, a prominent Spokane artist, poet, civic benefactor, philanthropist, and founder of Father’s Day. From 1913 to 1950, the Dodd House achieved significance as the home of Sonora Smart Dodd, who is recognized around the world as the woman who created and promoted official city and federal recognition of Father’s Day. Sonora Dodd’s tireless work while residing in the Dodd House led to an official proclamation signed by United States President Richard Nixon in 1972 which made Father’s Day an American holiday observed each year in June by millions of people throughout the country. Praised for enriching “the religious, civic, and cultural life of Spokane,” and for “giving Spokane credit in the eyes of the nation and the world,” Sonora Smart Dodd’s far-reaching contributions were summarized by the Spokesman-Review at her death: “Honor for thousands of fathers everywhere and for her home city through [the] establishment of Father’s Day is an everlasting epitaph for Mrs. John Bruce Dodd.”