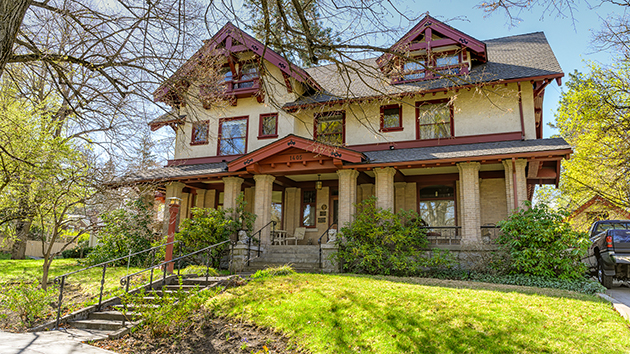 The Coolidge-Rising-Moyer house is a Craftsman-style residence located on a double lot on Spokane’s lower South Hill. The house is characterized by the restrained structural features associated with the Craftsman style. The overhanging eaves of the roof are open with exposed decorative rafter tails. The house is historically significant for its associations with two leaders in the commercial development of the region during the early twentieth century. Financier Alfred Coolidge, who built the house, was a founder, president, and director of banks in both Spokane and Whitman counties, as well as an officer in an investment firm and a mining company. Henry Rising, who purchased the home in 1924, was the long-time editor of The Chronicle and president of the parent publishing company. As a prominent banker and journalist-publisher, the two men played influential roles in the development of the Inland Empire, and the well-preserved Craftsman style house reflects the status of the men and their achievements. In 2017, the nomination was amended to add the "Moyer" name to honor long-time owners, Dr. John and Joanne Moyer, for their contributions to Spokane as prominent medical professionals as well as for their restoration of the home. The Moyers owned the home from 1987 to 2015.

The Coolridge-Rising House was listed on the National Register on its own merit in 1988, and as a contributing property in the Ninth Avenue Historic District in 1994. (The Moyer name has only been added to the Spokane Register nomination)