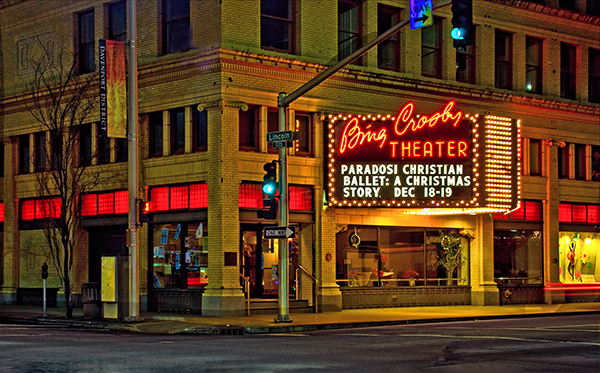 Excavation for this theater, built by mining magnate August Paulsen, began on March 3, 1914.  Known as both the Lincoln Theater and the Paulsen Theater during construction, the building became better known under the name of its first lessee, Dr. Howard S. Clemmer.  The Clemmer Theater opened for business February 22, 1915, which is also the year many film historians consider the beginning of the modern era of the motion picture.  Small, modest movie "theaters" were soon transformed into movie "palaces," becoming destinations in and of themselves.  The Clemmer was in the first wave of this movie palace tradition even opening before more famous theaters, such as Los Angeles' the Million Dollar Theater (1918) and Grauman's Chinese Theater (1922). The Bing Crosby Theater is one of only a handful of these very early movie palaces still in existence.  Interestingly, the theater was not limited to motion picture features; none other than Bing Crosby himself gave his last Spokane appearance at the Clemmer before going to Hollywood.  Operating under several names over its 100 year history, the theater was the Audian in 1930, the State in 1932, the Met in 1988 and, finally, the Bing Crosby Theater in 2006.