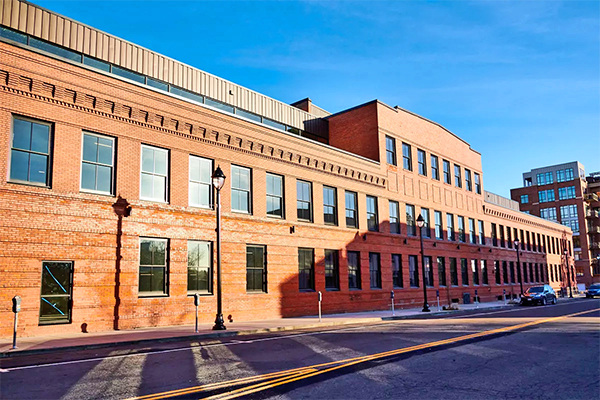 The Spokane-Continental Bakery Building is a well-preserved example of the industrial/commercial warehouse building type constructed during the first half of the 20th-century. Construction of the building began in 1909, and grew as various additions and modifications were undertaken in 1917,1920,1947,and 1956.The large 49,000- square-foot bakery warehouse is a multi-level, reinforced red brick masonry construction structure that extends through the entire blockfront along Broadway Avenue between Lincoln and Post Streets. Located a few hundred yards north of the Spokane River in an industrial/commercial section of Spokane, Washington, the warehouse building features a symmetrical pattern of tall windows that offer narrow between-building-views of the Spokane River. Common to most early 20th-century industrial/commercial warehouses, the bakery building’s exterior and interior are plain with little articulation or embellishment, and reveal common-bond brick masonry, an open and spacious interior with a combination of concrete-brick-wood plank floors, exposed brick masonry perimeter walls, high ceilings of 12 feet or more, and exposed structural posts and beams made of wood, concrete, and steel. Even with various exterior window and warehouse delivery door modifications during the past century, the Spokane-Continental Bakery Building retains good to excellent integrity in original location, design, materials, workmanship, and association. In a nod to several of the products produced in the building, it is now referred to as "The Wonder Building."