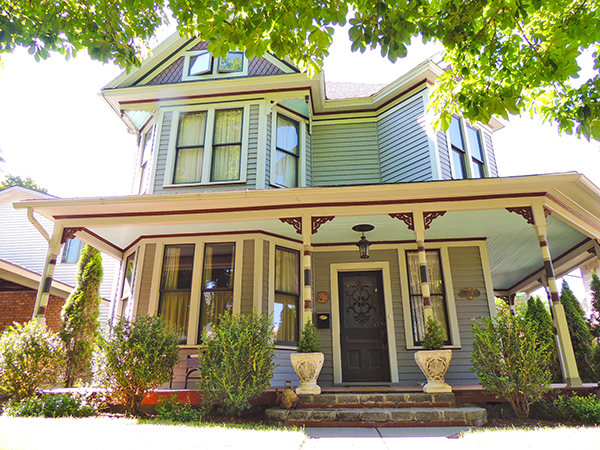 The Renstrom-Leigh House is a fine example of the Queen Anne style with strong influence from two of the style’s subtypes: Free Classic and Spindlework.  Free Classic elements are expressed in the home’s corbelled cornices and frieze bands while Spindlework elements are depicted as delicate embellishments found in turned posts and pendant drops.  An unusual design feature unique to the Renstrom-Leigh House is a diagonal box bay located above the wrap-around porch.  One of the first two homes erected in Booge’s Addition, the house was built in 1895 for teamster and wholesale grocery porter, Gustaf A. Renstrom, and his wife, Anna.  Four years later Walter E. and Anna King Leigh bought the property.  Leigh, a prominent Spokane citizen and an accomplished attorney, helped start several Spokane law practices including and invested in area mining properties.  He was also the owner and president of the Great Northern Land Company.  The Leighs lived in the house for 21 years, during which time they raised six children.  Later owners have discovered cancelled checks, printed stationery, notes, children’s books, magazines and a rare collection of love letters hidden under mounds of insulation and loose floorboards in the home’s third-floor unfinished attic.  The love letters were addressed to Miss Muriel Leigh, Walter and Anna Leigh’s daughter, in 1916 while the family lived at the property.