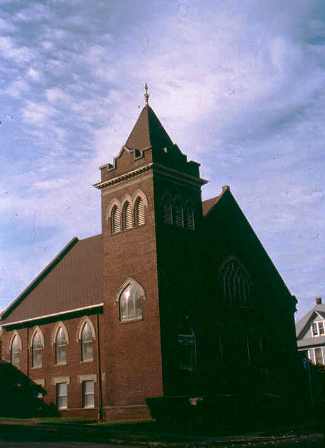 Liberty Park Methodist Episcopal Church is architecturally significant in its clear illustration of distictively-espressed early twentieth-century Gothic Revival architecture and as a rare local example of the Akron Plan, a style of interior layout that became the standard for Methodist and other Christian denominations by the 1890s.  The Akron Plan is so named because the Akron, Ohio, architect, George W. Kramer, and a Methodist minister, Lewis Miller, popularized it.  Distinctive components of the plan include a corner pulpit platform and radial orientation of pews.  The architect of the church has not been documented though family tradition holds that Leonard Starr, an architect and a member of the Liberty Park Church, designed it.  Starr worked as a draftsman for notable Spokane architect Albert Held in 1909 and 1910 and also did occasional work for Cutter and Malmgren, Spokane's most celebrated architectural firm.